My fifth great grandma was Elizabeth “Elly” Hays. She was born just before the start of the Revolutionary War on the Tennessee-North Carolina border to Samuel Hays and Elizabeth Pricilla Brawford. 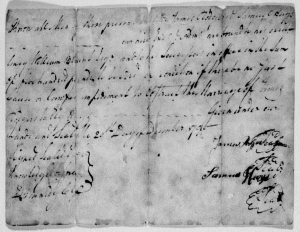 Elly was sixteen when she married James Rodgers in Tennessee on 20 Dec 1790. The document to the left is their marriage license. She birthed twelve children.

In 1811, the family packed up and moved to the eastern Mississippi Territory – a place called Alabama, which wouldn’t become a state until 1819. You know how difficult it is going on a road trip with little kids in the car? Imagine being on a wagon for two months with a dozen of the little rug rats and not a McDonalds in sight.

This was a time in history when the U. S. was flexing its political muscle and tensions were escalating, leading up to the War of 1812. And little did the Rodgers family know, they were moving into Creek territory. Not only were the Creek Indians fighting the U.S. Government, they had also broken into two factions and were fighting among themselves in a civil war called the Red Stick War. The Rodgers family moved into the middle of a hornet’s nest. They were harassed for years by the marauding Indians, who taunted them and stole their livestock, and the final straw, burnt down their home.

In 1815, her two eldest sons, Hays (Ancestor #18) and Absolom, joined the Mississippi Militia to help fight off the hostile Creek Indians, and following the boy’s discharges in 1818, the family moved west to Lauderdale County, Mississippi.

James died in Mississippi eight years later, and Elly moved back to Clarke County, Alabama and probably lived with her daughter Elizabeth. She died in the 1830s in her 60s in Grove Hill, Alabama. The exact date of her death is unknown. Her burial place is unknown.

Elizabeth Hays Rodgers is the heroine of my book “Elly Hays” which is the third book in the Okatibbee Creek series.