The first book in the Culpepper Saga is here!

John Culpepper was born into a privileged childhood, surrounded by abundant wealth, vast land holdings, and stately English manors. As he grew, he was expected to follow family tradition—attend law school and serve in Parliament, following which he would retire to a quiet life as a country gentleman.

John, however, had different desires. He longed to captain a mighty ship, to hear the snap of the sails, to taste the salty spray on his lips. To follow his dreams, John would have to risk being disinherited by his unyielding father. He would have to defy family convention. He would ultimately be forced to choose between the woman he loved and his mistress—the sea.

I, John Culpepper is a work of historical fiction based on the life of the 17th-century man historians refer to as John Culpepper the Merchant. He is believed to be the progenitor of the modern-day American Culpeppers. He was my 10th great-grandfather.

5 Stars! In I, John Culpepper, you will be transported back to the time John lived and you will feel like you are a part of John’s life. The experience of reading this book was out of this world. Granted, there are few too many characters in the novel and the reader has to concentrate to remember who is who, but once you get into the story, it is a magical experience and you will not want to miss it for anything! Amazing! I’m awed by what I read. Kudos! ~Rabia Tanveer for Readers’ Favorite

Lori Crane books are available at: 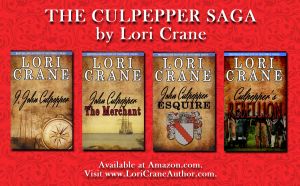 9 responses to “I, John Culpepper”