The last Ancestry post was about mom’s side, so in fairness, here’s one about dad’s side.

My paternal great grandparents, whom I knew and loved dearly, were Ben and Eula Pickett. This entry is about Ben’s grandparents.

Robert Theodore (3rd great grandfather) was born in Alabama on 2 Feb 1836 to Daniel L Pickett and Amelia Ferrill. He was the last of four children, because his mother died in 1836 or 1837. At that time in history, I would suspect she died shortly after 2 Feb 1836 due to complications of childbirth, but I have no proof. His father re-married in 1838 – a woman named Harriet Elizabeth Wilson. Daniel and Harriet had one child, and following Daniel’s death in 1851, Harriet married Miles Linton and had six more children. (My aunt also married a Linton, and if I did the research, I am positive I would find that her Linton was a descendant of Miles, making them not-so-distant cousins. Lauderdale is not a very big county. 🙂 )

Robert Theodore married Lucy Ann Rackley in Choctaw, Alabama in 1860 and shows up in the census there through 1880. All of their children were born in Alabama, but at some point, the entire family moved to Mississippi. If you don’t know, the 1890 census was burned up in a fire, so it is not available to us to research and hunt for clues. I know the family was in Mississippi by 1891, when the youngest daughter was married there. All except the youngest son are buried at Pleasant Hill Cemetery, Zero, Lauderdale County, MS. The youngest son died in Sicily Island, Louisiana and I do not know where he was buried, but he is not at Pleasant Hill.

I have photos of all of their headstones and most of their death certificates, but I won’t bore you with them.

Only Robert and Lucy’s… 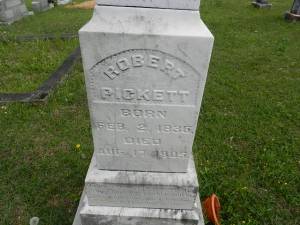 The only photographs I have of any of the children are the youngest son, Rev. Robert Tilden Pickett 1876-1947 and his wife Lilian Price 1877-1962. They married in June of 1904, three months before his mother’s death.

Aren’t they gorgeous?? (photos from the library of my cousin, Fran Pickett) 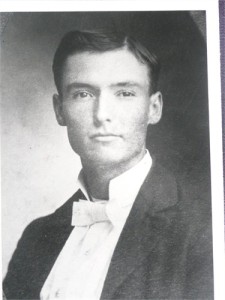 The other children were:

Two things strike me about the above dates: 1. Joseph and Lloyd couldn’t possible be born in the same year. One was born in Jan and one in Feb, so someone put the wrong birth year on the headstone. I have neither of their death certificates. 2. Maggie and Betty both died in 1924. According to their death certificates, which I have, Maggie died on June 26th of cancer and Betty died on August 28th. That must have been a difficult year for the siblings.

Also, only one of the four girls married – Annie Mariah. She married James Henry Fisher Sr. James’s sister, Caledonia D Fisher, married Joseph Lawson Pickett – the above mentioned 2nd great grandpa. “Callie” and “Joe” were the parents of my great grandfather, Ben Pickett, mentioned at the beginning. So, a Fisher brother and sister married a Pickett brother and sister. I know who my 2nd great and 3rd greats are, but I still have to stop and think about that for a minute. Annie Pickett Fisher and Callie Fisher Pickett make me stop and scratch my head every time.

Lucy Ann Rackley (3rd great grandmother) was born in Alabama on 6 Aug 1834 and died in MS on 8 Oct 1904.  Her father was Anthony Rackley and her mother was Julia A Johnson, and she was the youngest of their 6 children. Her parents were born in North Carolina and Virginia respectively, and both died in Alabama, though I am not sure when or why they moved there. Her mother died in 1860 and her father died just after 1880. Perhaps that is when the family decided to move to Mississippi. Fortunately for her, none of her children died before her, and her husband outlived her by 10 months.