I’m working on a book called “The Legend of Stuckey’s Bridge” and just tickled over the goose bumps I’m giving myself. As fast as it’s writing itself, it will probably be released by Sept 2013, Amazon and Kindle.

I grew up in Meridian, Mississippi and have family who live just off Stuckey’s Bridge Road. I’ve heard the legend my whole life. 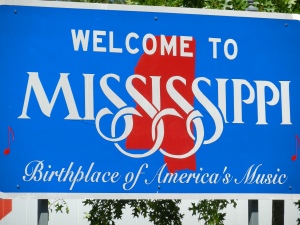 In the late 1800s, Old Man Stuckey ran an inn on a stagecoach route along the Chunky River. He could often be seen on the bridge, waving his lantern to passing flatboats, carrying produce and cotton up and down the river, and flagging down coaches who had been traveling all day. He offered weary travelers a soft bed and a hot meal.

According to legend, he buried their bodies along the banks of the river.

In 1901, the Virginia Bridge & Iron Company began rebuilding the dilapidated bridge and found the remains of Stuckey’s victims. The sheriff and his posse hung Stuckey from the very bridge he used to attract his victims. They left his body hanging for five days before the noose was cut and his body splashed into the cold water below. 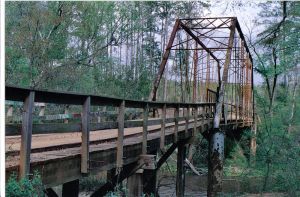 Stuckey’s Bridge is currently closed to automobile traffic due to needing repairs. As remote as the location is, I doubt it will ever be repaired, but it is on the National Register of Historic Places, so maybe someday it will get the attention it needs. 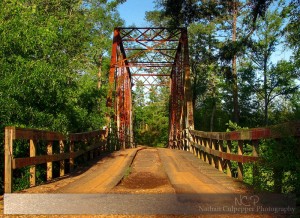 Two things strike me about the story.

1)      Old Man Stuckey must have been a serious psychopath or sociopath (Psychopaths are genetic, sociopaths are created, but both have the same personality traits). Since there are no records of his existence and no Stuckey family name in the county at that time, I wonder where he came from and what kind of background he had that made him so nuts. I think he was even crazier than Norman Bates—more along the lines of Hannibal Lecter. Yikes!

2)      I’m almost half-way through writing the story, and I still haven’t given him a proper name. My heart and mind are wide open to discovering/creating his given name, and hopefully it will hit me before I finish the book. I’m also a little nervous about opening up my psyche to such an evil presence. Heebie Jeebies!

If you visit Lauderdale County, Mississippi and venture out to Stuckey’s Bridge,

once you’ve crossed it, DON’T TURN AROUND!

8 responses to “The Legend of Stuckey’s Bridge”