Blogging from A to Z April 2013 Challenge

R is for Rice

As with other blogs on my site, this is about my ancestors–the Rice family.

My 3rd great grandfather was Rice Benjamin Carpenter. He was born in 1828 and died during the Civil War serving the Confederacy at the battle of Stones River in Murfreesboro, TN on 31 Dec 1862. He left behind a wife and four young children. He is buried at the Confederate Circle at Evergreen Cemetery in Murfreesboro. 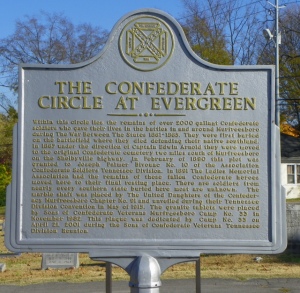 His first name came from his mother’s family—the Rice family. His mother was Nancy Rice, born born 1791 in NC. At some point around 1834ish, she and her husband, Benjamin Carpenter, packed up their home and five children and moved to Lauderdale Co, MS. After arriving there, they had five more children. Nancy and Ben both died in Lauderdale Co in 1870 and 1865, respectively.

Nancy’s father was John B Rice (I bet the B was for Benjamin). John was born in 1755 in NC and died there 29 Apr 1836. He married Elizabeth Hopkins, who was also born and died in NC. They had at least eight children in the late 1700s, including a son named Hopkins Rice. Is this getting confusing yet? John served in the American Revolution (pension no 59062). That makes at least 3 grandfathers of mine who served.

One of my genealogy buddies found the following in a Rice Family archive. It reads to be from a slave’s descendant.

“My family history dates back to Nash County, North Carolina in 1787. A woman by the name of Chaney was born. Little is known about her background, but it is believed that she was the daughter of an African. I have done extensive research on the slaves of Hopkins Rice. It is believed that Chaney and her sister were given to the Hopkins Family of Nash Carolina. Peter Hopkins was the first Hopkins in his family to move to Edgecombe County, North Carolina. He was born in 1730. He married a woman named Wilmoth Fowler. She was born in 1747 in Wake County, North Carolina. She was the daughter of Joseph F. & Anne Fowler. The couple had known children: William Hopkins, John Hopkins, David Hopkins, Elizabeth Hopkins-Rice, and Susannah Hopkins-Russell. The Hopkins oldest daughter, Elizabeth, married a Revolutionary War Hero named John Rice. He was born in 1755 in Bute County, North Carolina. They moved to Nash County, North Carolina and purchased about 800 acres of land on Lee’s Creek. They couple had about eight children.1. John Rice, 2. William Rice, 3. Elizabeth Rice-Richardson, 4. Nancy Rice-Carpenter, 5. Mary Rice-Marriott, 6. James M. Rice, 7. Benjamin Rice, 8. Hopkins Rice. Chaney was brought to this plantation, but it is unsure exactly when. However most of her children were born on the Rice plantation. There is a strong possibility that she had more than five children, but it is uncertain. In the early 1800’s John Rice deeded Chaney and her children to his son Hopkins Rice and his wife Jane. In the early 1820’s Hopkins and his family migrated to Greene County, Alabama by way of Georgia. They purchased land in 1828, where the estate grew in the Clinton and Pleasant Ridge areas. In the later years, some of the Rice’s were sold to various plantations. One of Chaney’s sons, Anderson, was sold to Eldred Pippen. Also three of her great grandsons were sold. Jesse Rice was sold to Gaston Wilder of Pickens County, Alabama. Richard “Dick” Gilmore was sold to William Gilmore of Mantua. The last son was sold to a Harkness, whose name is not known.”

John’s father was Jared or Jerret Rice. He was born around 1730. He married Lettie Potts and they had at least six children. They lived in NC. My second great grandmother (Rice Benjamin Carpenter’s first child) was Martha Lettie Carpenter Blanks. I always wondered where the name Lettie came from. Now we know.