I went to Put in Bay, Ohio to witness a spectacle.

It was the 200th anniversary of the Battle of Lake Erie and the very first naval re-enactment of the battle – and it will probably be the last.

You must understand, this is hours away from my house and I rose at 4freakin’a.m. to go there. THAT’S how cool this was. 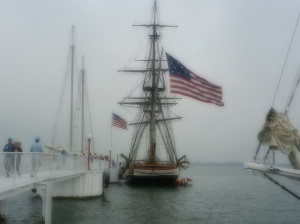 Early in the misty morning, a dozen tall ships docked in port, loaded sailors, filled gun powder stores, and headed out to fight in the middle of the lake, most likely making the Coast Guard absolutely nuts. I’m sure it was an exorbitant amount of logistics to plan and a pretty penny to finance, and I am so grateful to have been a witness, as I’m fascinated by these beauties.

And when all of the preparations were done and the morning fog began to dissipate, they raised their sails.

One of the awesome things I learned was Capt. James Lawrence was mortally injured in an earlier battle in June 1813 in Chesapeake Bay, and on his death bed, he told his crew, “Don’t give up the ship.” 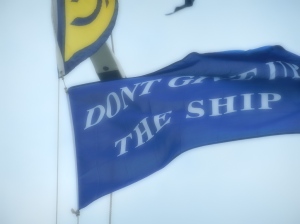 His friend Capt. Oliver Hazard Perry (pictured below) had that quote sewn onto a flag and flew it above his ship the USS Niagara during the Sept 1813 battle. It became the battle cry for the American fleet.

What an AMAZING day!

5 responses to “Flirting with Sailors in the War of 1812”