As I was writing “The Legend of Stuckey’s Bridge,” I came across the most amazing fictional character. He is eccentric, charming, rich, and good looking, mixed with a heaping tablespoon of psychopath. I am completely obsessed with him and his story. What if someone in the story is not as impressed with him as I? What if that person would rather see him dead? 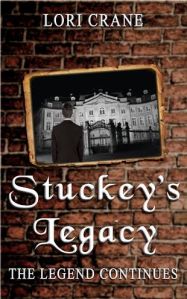 There is an undeniable sequel to “The Legend of Stuckey’s Bridge”  – “Stuckey’s Legacy: The Legend Continues” – available June 1st in paperback, Kindle, Nook, and iBook.

For my dear friends and faithful readers, here’s a sneak peek. It will give you a flavor of my new favorite psycho Levi.

“…five…four…three…two…one…Happy New Year!” the crowd chanted in unison and the orchestra began to play “Auld Lang Syne.” Balloons fell from the ceiling and confetti was tossed from the mezzanine. It fluttered to the floor, covering couples who clung together on the ballroom’s massive dance floor. Wine flowed and lovers kissed, and twenty-two-year-old Levi stood off to the side, sipping his champagne, observing the festivities with a mixture of apathy and loathing.

A gentleman in a crumpled tuxedo, heading toward the bar, staggered by him and nodded. Levi coldly nodded back, hoping the intoxicated man wouldn’t stop to chat. He was here to observe and mingle, not to spend the evening listening to a slurring drunkard. It had taken him a decade to get into this elite circle and he wasn’t going to let some sot spoil it. He downed the remaining liquid, plopped his empty champagne glass on the nearest table, and quickly moved across the room.

Following a magnificent dinner of pheasant and turkey in the Grand Dining Room, he had thus far spent the evening strolling around the luxurious Jekyll Island Club, chatting with people with familiar surnames—Firestone, Carnegie, Rockefeller, Vanderbilt. He introduced himself to them as Levi Temple, a business partner of the late Cornelius Bliss.

Temple wasn’t his real name, though he had been using it for the last ten years. Most people in his hometown of Meridian, Mississippi, would remember him as Levi Stuckey, the boy who’d mysteriously disappeared following the hanging of his father from the iron rails of Stuckey’s Bridge. His father was Thomas Stuckey. He wasn’t Levi’s real father, but when someone back in those days assumed he was, Levi never bothered to correct them. As a matter of fact, Stuckey wasn’t that man’s real name, either. He took it from one of his victims, a man named Carter Stuckey. Carter Stuckey had spent the night at Thomas’s inn on his way to deliver a trunk to Vicksburg—a trunk full of gold. Not many visitors ever left that inn, especially visitors who carried great wealth. Carter Stuckey fit that description, meeting his demise for being a deliveryman. Thomas Stuckey never got to enjoy the gold he stole, though. He was strung up for murder before he even viewed the sparkling contents of the trunk.

Following Thomas’s hanging, twelve-year-old Levi disappeared with the trunk. He took a horse and wagon and rode away from Meridian with the trunk, and he didn’t leave a trace.

After he fled, he dropped the name Stuckey so he’d never be associated with Thomas, Carter, or the missing trunk of gold. He considered taking back his given name, but he didn’t want to be linked to the sack of crap who owned that name, either. It had been so long since he’d used his real name, he could barely remember what it was. So, after a quick deliberation, he took the name of the only man he’d ever trusted, the sheriff of Lauderdale County—J.R. Temple. Yes, Temple was a good name, a good name from a good man. Levi always felt a tinge of remorse for disappearing and leaving Sheriff Temple to wonder what happened to him, but at the time he didn’t have a choice. He deserved more in life than a stolen name and a tainted past with murderers, drunks, and whores. The gold could give him the future he wanted.

Since the moment he left Lauderdale County, Levi had spent every waking hour infiltrating the inner circle of high society, and as of tonight, he had finally arrived. So far, this seemed a very good place to be. He sipped imported sparkling champagne as he socialized with gentlemen in expensive tuxedos, beautiful women adorned with exceptional jewels, and even a few servants who scurried around catering to the social elite. Though he wasn’t born into this circle, and he thought most of them idiots who were beneath him, he felt at home here. He was finally receiving the respect he deserved.

As the orchestra struck up a lively ragtime tune, Levi walked toward the patio door to step outside and get a breath of fresh air. His heels clicked on the marble floor as he passed velvet chaise lounges and crystal chandeliers. The leaded-art glass was a sight to behold and the classical details of the mansion were breathtaking. He would have a house this fine someday.

He found the patio alit with lanterns and twinkling holiday lights, flanked by sweeping staircases that led down to the beach. The half moon shone brightly in the winter sky, and an ocean breeze rustled through his dark blond hair. He closed his eyes for a moment and enjoyed the gentle wind on his face. He took a deep breath of the ocean draft. It smelled like fresh linen hung on the line. He opened his eyes and looked around. Baskets filled with late-blooming roses were spaced intermittently around the cement patio. Other than the fragrant flowers, he found the patio nearly empty. Everyone was inside on the dance floor celebrating the arrival of the new year. Everyone except that brunette he had been eyeing all evening.

He had noticed her hours earlier, the moment she entered the front door. She was petite but floated into the room like she owned the place, all willowy with a smoky air about her. Her charcoal-lined eyes were dark and seductive, hiding playfully behind the rim of her extravagant black velvet hat. When she walked, the long, white ostrich feather on top of her hat danced with each step. He found her movements intoxicating.

She wore the most luxurious mink stole he had ever seen, and when she removed it, she looked like a Grecian goddess. Her empire-waist dress flowed to the floor, the black velvet bodice cut low enough to make every man in the room stop and stare. The black fan she fluttered in front of her face made her even more exotic. Levi had attempted to approach her a few times throughout the evening, but she was always surrounded by admirers and he couldn’t get close enough to utter a single word. Out here on the patio, she was again with a gentleman.

Levi stepped to the edge of the patio and placed his fingers on the railing. She had her back against the railing, being courted by some wealthy boy in a man’s suit. Levi snickered. These rich boys don’t know how to seduce a woman, he thought. They think they can have anything they want, including a woman, simply because their fathers gave them money.

He remained still and looked out to the sea. The moon illuminated a path of white on the dark water. The reflection went all the way to the horizon. He absentmindedly reached into his jacket pocket and pulled out his silver lighter. He flipped it open and closed over and over with one hand. He kept stealing glances to his left at the couple, wondering if he should interrupt them. The rich boy stumbled forward a little, almost falling onto the woman. He seemed to be more than a little drunk. Levi held his breath and waited for the woman to say something, hoping he’d be able to tell whether or not she needed him to intervene.

When she spoke, her voice had a deep rasp with the slightest Southern drawl. Why did that not surprise him? He felt a stirring in his loins and glanced again at the couple.

“Mr. Goodyear, I’m flattered by your attention, but don’t you think we should be going back inside now? Your friends are surely looking for you.”

The boy caught his balance, stood up straight, and countered, “No, they’re not looking for me. They’re having their own fun…just like we should.” The boy leaned in for a kiss, but the woman turned her face to the left and looked directly into Levi’s eyes. She smiled faintly.

It was not the plea of a woman needing assistance that he’d been expecting to see. The expression he saw on her face was one of confidence and power. This woman didn’t need his help. She was more than capable of fending off a drunken suitor. Levi watched her as she scowled and playfully pushed on the boy’s chest to back him away.

“Really, Mr. Goodyear, that’s enough for now.” She pushed harder on his chest.

The boy shrugged and mumbled something Levi couldn’t make out. The woman pulled her fur around her shoulders and narrowed her eyes at Levi, suggesting he should mind his own business. She turned the boy toward the open doorway, tucked her arm into the crook of his elbow, and led him toward the ballroom. As the two made their way to the door, a woman’s bloodcurdling scream came from the direction of the beach.

Levi and the couple turned toward the ocean, attempting to see the source of the screaming through the palm trees that lined the patio, but it was impossible. The screaming continued. People began streaming out of the ballroom, asking what was going on, and men sprinted down the stairs on both sides of the patio, hurrying toward the sound.

Levi turned and looked at the alluring woman, whose young suitor had left her standing alone while he joined the other men heading to the beach.

She stared into Levi’s eyes with no expression.

Just for kicks, I think this is the woman Levi was watching, and I think she’s going to be trouble with a capital T. 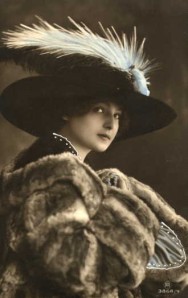