She is pictured here in the center with her husband WB Saterfiel to the left, her father JB Culpepper to the right, and her children from left to right in front Dewey Oliver Saterfiel and baby Alma. In the back row, left to right, Evie Mae Saterfiel Hodges, Indeola “Necie” Saterfiel Byrd, Willie Carlos Saterfiel, Adie Joseph Saterfiel.

Side note: I ordered my grandparent’s marriage license and the witness was D.O. Saterfiel, the little guy. He was my grandpa’s cousin. I sometimes forget these people knew each other. 🙂

She was my grandpa’s aunt Dora. She was born to Joel B Culpepper and Mary E “Mollie” McFarland in Sumter County, Alabama, as the only girl with five brothers. There was another girl born to the union, but she died at birth. Aunt Dora was the eldest of the children, so I imagine she was the caregiver to her little brothers. At some point when the children were little, the family moved to Kemper County, MS. After her mother’s death in 1908, her father moved in with her for a short time. That’s when this photo was taken. Shortly after this, he was placed in a soldier’s home in Biloxi, MS, where he died less than a year later, on Nov. 11, 1911. Dora was 40. 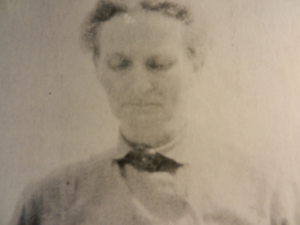 When she was about 19, she married William Bartley Saterfiel around 1890 and had six children. Three of her children married into the Hodges family. Mr. Hodges married three times, and with each union came more children. The three Saterfiel children married a Hodges child from each of the three wives. The Hodges/Saterfiel family reunion must be confusing.

She lost her youngest child in 1912. Baby Alma was only five years old when she died, not very long after the top photo was taken.

Following her husband’s death in 1925, she married GW Watson in 1929. Though she was married to Mr. Watson for 21 years, her headstone reads Eudora Saterfiel and her obit says nothing of Mr. Watson’s children. She died at the age of 78. Her obit is as follows:

Her father, husband, and baby Alma are buried at Zion Cemetery, Kemper Co, MS. She and her other children are buried at Pine Grove Cemetery in Lauderdale Co, MS. Mr. Watson and his first wife are buried at Memorial Park in Newton Co, MS.