This year is the 225th anniversary of the inauguration of the President of the United States. I’m sure you don’t really care, but the first inauguration was quite interesting. Here are some facts: 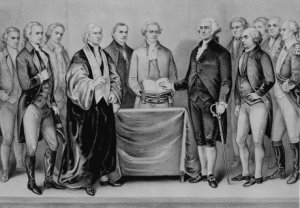 The inauguration happened two months late, because bad weather delayed members of the very first Congress’s arrival in New York, where they were voting. Travel was a bear in those days, but the inauguration finally happened on April 30, 1789.

George Washington was UNANIMOUSLY voted into office. When was the last time the House and the Senate did anything unanimously?

They had to borrow a Bible from the Masonic Lodge down the street.

This event set the stage for future inaugurations to follow. It was held outdoors. It included a Bible. The inaugural address was given to a joint session of Congress. The event was followed by a church service and festivities. We still do all those things today. There is one thing that is questionable though. Modern day presidents end their oath with the words, “So help me God,” believing they are following the tradition of George Washington, but there is no evidence Washington ever said that.

And just so you know, Washington served as President without pay.