My aunt lives in Meehan, Mississippi where she married Robert McQueen about fifty years ago. She told me one day an old black man came knocking on her door. She lives in the middle of nowhere, so a stranger knocking on her door was highly unusual. But being in the friendly South (and the fact that she always has a loaded pistol on her), she wasn’t concerned with not knowing the stranger, so she opened the door. He offered to sell her some vegetables. I don’t know if she bought them or not, but the two struck up a conversation.

He asked her if she knew the old Allen Plantation. He said his grandfather worked on it his whole life and it was around the area somewhere. She told him her mother-in-law was an Allen, but she didn’t know if they had a plantation, and she wondered why she had never heard of a family plantation before now.

I began searching for clues. Draw yourself a diagram and follow along. My aunt’s in-laws were William “Mac” McQueen and Mabel Allen, who was the daughter of Preston and Minnie Allen. Mabel’s uncle (Preston’s brother) was Joe Oliver Allen who married Amelia Hand. The couple lived in Amelia’s parents house (Alexander Trotter and Eliza Hand), and after her parents died, the property naturally transferred into the Allen family. I’m convinced the photograph below (circa 1903) is the family plantation the man on my aunt’s porch was speaking of, and if you look on the far left side, you’ll see a black man in the background. His name is George Weeks. My aunt never saw her visitor again, and I wonder if this man in the photo is the grandfather he spoke of. 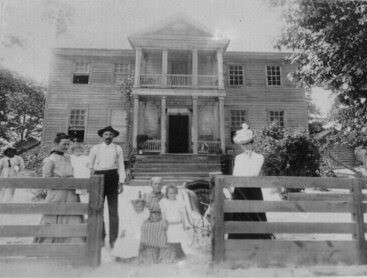 Sitting Down in the middle is Eliza O’Ferrall Hand

The two little girls with Eliza are her granddaughters, Alda Allen and Marion Inez Allen.

To the right in the fancy hat is Eliza’s daughter Corette Hand.

The following info is from al and mary dot org…

“Note the black man to the far left of the picture. His name is George Weeks. I have been told that right after the Civil War, George showed up at the Hand home, hungry, ragged, and able to speak only a few words of English. He was obviously just a few years from Africa and very confused. The Hand family took him in and he worked for them the rest of his life. The A. T. Hands moved into this home about 1878. Several years after this picture was taken, the old home burned, and the Allens rebuilt on the same site. I can remember the Allen home, having visited there with my parents in the late 1930’s or early 1940’s. What I remember most about the home was a spring located across the road from the house with a hydraulic ram that pumped water up the hill and across the road to a tank that was located to the left of the home.” ~ Albert H Spinks, April 23, 2001.

2 responses to “Anyone seen a plantation around here?”