This challenge is set forth by No Story Too Small, and this week’s theme is “Luck of the Irish.”

The early 1500s in Ireland was characterized as “His Majesty’s Irish enemies.” The Irish were repressed by England, yet they managed to maintain their own language, social system, customs, and laws. Undoubtedly, life was hard five hundred years ago as many Irish lived off the land, mostly as shepherds, but if you love the land as much as I do, you might find this the luckiest of lifestyles.

Most of my ancestors hail from England, but there are a few from Ireland. One is my 14th great grandfather, Thomas Weldon, or Veldon as it was originally known. My 4th great grandpa, Jeremiah Crane, married Mary Polly Weldon who was born in Georgia. Her family came from Delaware, via Massachusetts in the early 1600s, and England in the 1500s. The Veldons originally came to Ireland with the Anglo-Normans in the 12th century and settled in “The Pale” which includes the County of Meath, just north of Dublin. Thomas was born in 1480 in Meath and died there at the age of 73 in 1553. I think that’s a considerable age considering the times. Even though his life was undeniably hard, imagine the sites, smells, and sounds he was surrounded by every single day of his life. Below are a few photos of the area as it looks today. I say Thomas Weldon was lucky indeed. 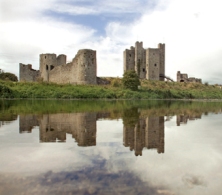