This challenge is set forth by No Story Too Small and this week’s theme is “The Old Homestead.”

There is a house in Lauderdale County, Mississippi that I would give anything to own. It was built in 1857 by sixty-one-year-old Hays Rodgers Sr (photo). According to the 1860 census, it looks like he had the help of thirteen slaves. It was the first plank house built in the area. Hays was my fourth great grandfather. 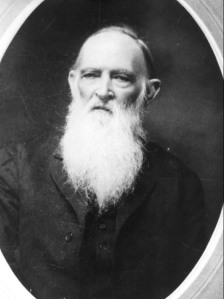 He died of typhoid December 1863, so he didn’t enjoy the house for long, and his wife died the following March. The children were grown and gone, most of the boys lost to the Civil War, so the house sat empty until well after the close of the war. In 1869 it was sold at auction on the steps of the Meridian Courthouse to Major Adam T Stennis (hence the name Ole Stennis House). It remained in the Stennis family for one hundred years but was abandoned and covered in vines toward the end of their ownership.

In 1970, the Hover family bought it and restored it. Mr. Hover told me the only thing he really needed to replace was the rotted front porch. The rest of the house was in good shape. I stopped by there in 2012 and he showed me all around. I didn’t feel comfortable taking pictures of the inside, but I snapped some photos as we left.

If he ever sells that house, I would love to own it.