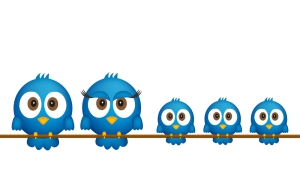 Building your Twitter following is easy as pie, but it does take consistency.

So, you’ve started a Twitter account and wonder what to do next? How do you make friends, grow your audience, build your following? Sometimes Twitter feels like being in a room with everyone screaming at the same time, but you can wade through the chaos with a few simple steps.

1. Decide what your interest is. I imagine it’s writing or you wouldn’t be on this blog reading this. So, in the search box, type in something specific, say “indie authors” or “civil war” or “sparkley vampires.” This will pull up only people and comments that contain that specific phrase.

2. Click on the names of the people who interest you. If they have about the same number of followers as following, they are likely to follow you back. If you want to grow your followers, those are the people to follow. People who have 50k followers but only follow 18 people are not likely to follow you back. If you are interested in their Tweets, follow away, but if you’re trying to grow your following, don’t waste your time or your finite following limit (more on this below).

3. Do this 10 minutes per day. Click on people you’re interested in for all the topics you put in the search box. Do it religiously. Set your alarm. 10 minutes is all it takes. You’ll be amazed at how quickly your following grows after a few weeks.

4. Use advertising finesse! Only advertise your product every so often, maybe one-out-of-every-ten-Tweets. Use the other 9 Tweets to make friends, share information, build a rapport. After all, it is SOCIAL media.

5. Put yourself on a schedule. Cultivate your followers for 10 minutes per day. Tweet twice per day. Respond or comment on other Tweets twice per day. Re-Tweet other’s Tweets twice per day. If you’re doing the math, that’s 6 Tweets. That means tomorrow, you’ll hit your one-out-of-ten-Tweets advertising point and  you can post a link to your book or your review. Don’t forget to add hashtags so it gets retweeted. Click HERE for a big list of hashtags for writers.

Check out CrowdFire. It holds all the magic buttons to see who is following you back and who is not.

Pre-schedule your tweets at Twuffer! If you’re busy or out of town, this can keep your account active for you.

Let the computer re-tweet for you at RoundTeam. You can choose up to three hashtags to retweet.

One note about the number of followers you can have. Twitter has a magic 2000 following limit at the beginning. When you try to follow #2001, you’ll get a pop-up from Twitter telling you that you’ve reached the maximum number of people you can follow. It’s a percentage thing. Once you reach 1819 followers, that 2000 number will begin to increase. As a matter of fact, the number over 2000 you can follow is 10% of your followers. So if you have 1900 followers, you get an increase of 190, so you can follow 2190 people.

Take your time. Work at it a little every day. When you Tweet about your new book and it gets re-Tweeted by 28 people to 800,000 people, it’s worth it. Happy Tweeting!

Lori Crane is a bestselling and award-winning author of historical fiction and the occasional thriller. Her books have climbed to the Kindle Top 100 lists many times, including “Elly Hays” which debuted at #1 in Native American stories. She has also enjoyed a place among her peers in the Top 100 historical fiction authors on Amazon, climbing to #23. She resides in greater Nashville and is a professional musician by night – an indie author by day.

4 responses to “Build Your Twitter Following in 6 Easy Steps”