This challenge is set forth by No Story Too Small and this week’s theme is “Challenging.” 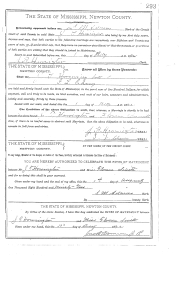 Florence J Smith Howington was my 2nd great-grandmother. The only thing I know for sure is she married John Thomas Howington in Newton County, Mississippi on 1 Aug 1892. The marriage record (photo, click to enlarge) says she was sixteen years old, making her birth around 1876, although the 1900 U.S. census says she’s white and 28. The 1910 census says she’s 36. Her husband was married previously in 1880 to Ellen Raynor who died in 1891. There is no record of any children. Once John and Florence married, they had eight children between 1893 and 1910, the eldest being my great grandmother Mary Elizabeth Howington. 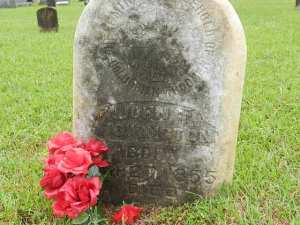 John Thomas Howington died in 1913 and Florence never remarried. She died at the age of 93 in 1969. There is a blank spot in the Pine Grove Cemetery in Collinsville, Mississippi next to John’s headstone (photo). If Florence is buried there, she has no marker.

The frustrating thing about tracing her is that I was always told I had a grandmother who was of Choctaw Indian descent, and if that’s true, she has to be the one. The Choctaw were run out of Mississippi at the signing of the Treaty of Dancing Rabbit Creek in the 1830s. They migrated to Oklahoma. The ones who stayed changed their names to assimilate into the white European culture. Of course, there would be no prior record of them, and seeing as they probably couldn’t read or write English, there wouldn’t be a record of their name change.

There are a lot of Smiths listed in the Choctaw registries in Mississippi from 1847-1933, but I haven’t been able to trace Florence without knowing at least one of her parent’s names. There are also census records of Choctaw families residing east of the Mississippi River and in the states of Mississippi, Louisiana, and Alabama. One such record is a census called the “Cooper Roll,” made by Douglas H. Cooper, US Agent for Choctaws, in conformity with the order of  the Commissioner of Indian Affairs dated 23 May 1855.

The following is part of the Cooper Roll naming the Chunkee Clan (Chunky is the town in Newton County, Mississippi where Florence lived.) Obviously the names were spelled phonetically. I have no clue which one, if any, could be Florence’s family, but seeing that the list was made twenty years before her birth, I wonder if one of the names is her grandfather.