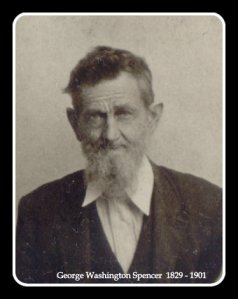 My 3rd great grand-father became a Confederate soldier in 1862, but in 1860, he was listed on the U.S. Census as a school teacher in Newton County, Mississippi.

George Washington Spencer was born in Alabama in June 1829, the son of preacher William Saladin Spencer and his wife Martha Didama Gross. GW grew up around the Shake Rag Church (photo) in Tuscaloosa, AL as one of eleven children. His last sibling was born in 1835, his father died in 1841, and his mother died in 1867 all in Alabama, but at some point GW moved west to Mississippi. At the age of 29 in 1858, he married Nancy Virginia “Jenny” Holdcroft, and in 1859, they had their first child, my 2nd great grand-mother Nancy Didama Spencer. (She was followed by six siblings.)

The Spencers made their home in Newton County, MS, and with a wife and a baby at home, GW needed a job, so he became a school teacher. There was no organized education at the time, so communities and churches usually gathered up some money and asked someone to educated their children. Teachers were generally left to their own devices to create a curriculum, and classrooms usually held children of all ages in one room. But the good news is that twelve-year-old children at the time were educated with books we would consider college level today. GW spent his days with the local kids, expanding the minds of the next generation.

Then the war began.

He enlisted 1 Mar 1862 at Scooba, Mississippi with Co.B 35th Mississippi Infantry. According to family members, he was sick most of the war from a leg infection and was medically discharged 10 Jan 1864. Rosters show him in Confederate hospitals in Jackson, Marion, and Lauderdale Springs, Mississippi. The passed-down family story is that his wife went by horse and wagon to pick him up from a Confederate hospital to bring him home. This was just before General Sherman’s march from Vicksburg to Meridian in Feb 1864.

Following the war, he is listed on all census records as a farmer until his death 22 Jul 1901. His career in education was a short-lived one.

GW and his wife Jenny are buried in unmarked graves at Hickory Cemetery, Newton County, Mississippi.