I’ve been participating in the “52 Ancestor” challenge all year, following along with the weekly themes and having a great time. BUT…I work out of the country for months at a time and generally write and schedule the blogs in advance. APPARENTLY, someone has dropped the ball in getting the October themes posted. As I type this in the real word today is Sept 24 and I leave for the month of October on Sep 26. I have today and tomorrow to write and schedule October’s ancestry blogs. SO, I’m forced to blog without themes.

I also write a blog called “On This Day,” which takes place on the day of the birth/death/anniversary/etc. of an ancestor, BUT I’ve not posted many “On This Day” blogs this year because I’ve been doing “52 Ancestors.”

Guess we’ll have to combine the two for the month of October. 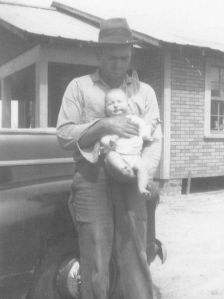 James Otis Burke (photo with infant son), whom we loving called Uncle Otis died on this day in 2003. He was my grandmother’s younger brother, my great uncle, born 14 Feb 1922 to John Patrick Burke and Mary Elizabeth Howington. He was the middle child of seven children, one who died as an infant. He was born and raised in Little Rock, Newton County, MS. There’s not much in Newton County but farmland, but the city of Meridian isn’t far away.

When he returned from the war, he married Luna Marie Arledge and they had three children. One boy and two girls. I remember my mother speaking of her cousins so lovingly. They were products of the 50s generation. I’m sure they spent many nights at the drive-in in town, and I picture them hanging out together just like the “Happy Days” TV show. 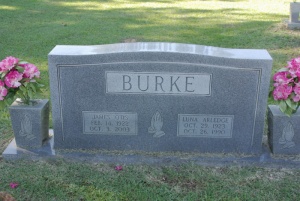 He died on October 1, 2003 at the age of 81 and is buried with his wife at Pleasant Grove Baptist Church Cemetery in Newton County. 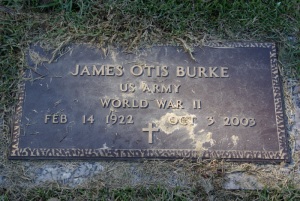