Lucy was my 3rd great grandmother on my dad’s side. She was born in Choctaw, Alabama 6 Aug 1834 to Anthony Rackley and Julia Johnson. She was the baby of six children, with three sisters and two brothers.

She gave birth to a daughter in 1859 and another in 1860, but the records I have say she didn’t marry until 1860. It wasn’t unusual for the time to only have a ceremony when a traveling minister came through town, or it could have been that the wedding certificate wasn’t filed until 1860. Either way, she married Robert Theodore Pickett and the two had four girls followed by five boys in Alabama, one being my 2nd great grandfather Joseph Lawson Pickett. Sometime after the 1880 census, the family moved to Mississippi. Lucy’s mother had died in 1860 and her father lived with her until his death in 1880. That may have been the tipping point of leaving Alabama. The family was in MS by 1891 when the youngest daughter married there.

They are laid to rest at Pleasant Hill United Methodist Cemetery in Zero, Lauderdale County, MS. 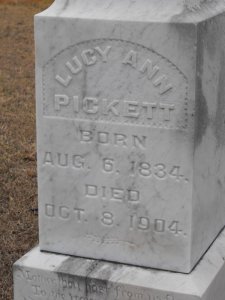