The following is a rough draft of my current work-in-progress, The Culpepper-Fairfax Scandal. Catherine Culpepper is nineteen years old, and her rich father, Lord Thomas Culpepper the baron of Thoresway, has just died. For two decades, he had been living in London with his mistress and had left everything to the mistress in his will, but Catherine’s mother had the will suppressed. This scene takes place at the probate hearing at Westminster.  Thanks to her mother, Margaretta, and her uncle Alex, Catherine inherited nearly everything.

We’ll make due with a painting of Catherine until I can get a proper book cover made. 🙂 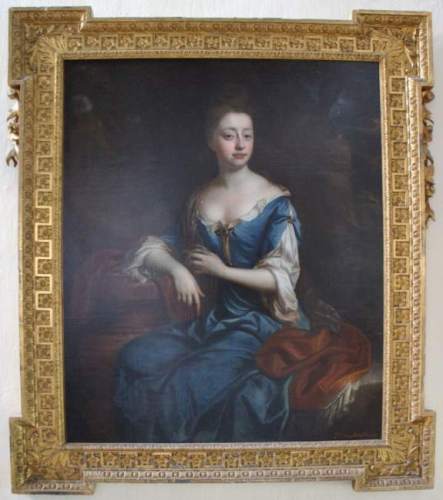 When the proceedings ended in Catherine’s favor, Margaretta and Alex attempted to whisk Catherine from the courtroom, but they were met at the door by a crowd of enthusiastic well-wishers and more than a few gentlemen of questionable intentions. Catherine had just inherited more wealth than she could ever dream of. Not only was she now the sole owner of Leeds Castle, she also held manors and lands in Sussex and Essex, and was one-sixth owner of the proprietorship of the Virginia Colony. The crowd’s din grew as they attempted to get closer to the wealthy heiress. Pushing and shoving toward her, people reached out to touch her, to take her hand, to gain her attention and her favor. When the family emerged from Westminster, Alex hailed their coach, but when he turned back for Margaretta and Catherine, they had been separated from him by a sea of bodies. Margaretta reached for her daughter’s hand to pull her through the crowd, but their fingers were inches away from each other’s as Catherine was pushed back by the crowd, away from the protection of her mother and their waiting carriage.

Catherine heard her mother’s call but couldn’t see her over the heads of the people surrounding her. She attempted to turn, but a growing throng of people blocked her way. Someone was standing on the hem of her gown, stifling her movement, lest she rip her skirts. Her mother called for her a second time. Her heart began pounding as she heard the panic in her mother’s voice and suddenly realized she might be in a dangerous situation. The crowd was growing riotous, pulling at Catherine’s clothing and her hair. Her honey-colored curls fell to her shoulders as her hairpin was snatched from her head, taking with it a handful of hair. She cried out for her mother, for her uncle, for anyone to save her from the melee. It was then that she felt a strong arm around her waist and another under the back of her legs.

“I’ve got you,” he whispered in her ear.

She was scooped into the arms of a savior. She buried her face into his shoulder as he pushed his way through the crowd toward the waiting carriage. When she was gently placed onto the seat in the carriage, she smoothed her hair from her face and lifted her eyes to look at her uncle. But her savior wasn’t Uncle Alex.

Before her stood a striking man whose brown eyes bore into her own, his dark curls falling over his brow, his full lips begging to be touched. Their eyes locked as if time stood still. He then nodded to her and quickly closed the carriage door, disappearing into the crowd.

Uncle Alex yelled for the driver to make haste, and the carriage sped away from the scene, the wheels bouncing on the rough cobblestone street.