Since I wrote about Whitehall Palace yesterday and mentioned one of its owners, Thomas Wolsey, I thought I’d stick here in W for a minute and go a little more in depth about Mr. Wolsey, his amazing rise to status and his total and swift downfall. 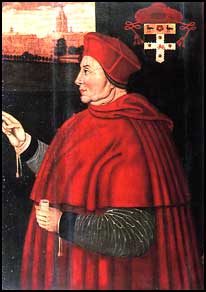 Thomas was born the son of a butcher in England in March 1473. In his twenties, he studied theology, eventually becoming a priest and a chaplain to the Archbishop of Canterbury. In 1509, he went to work for King Henry VIII. That’s where the fun begins. Keep in mind, young Henry was only 18 years old at the time, and I’m sure the 36-year-old Wolsey figured he’d lead the king in righteousness with his mature and prudent ways.

Things went along rather well for Wolsey. You saw his house in the Whitehall Palace blog. Obviously, he was well taken care of by the king. Having the young king’s ear, Wolsey quickly became the controlling force behind all matters of state, and when Pope Leo X appointed Wolsey Archbishop of York in 1515, he became the second most important cleric in England. Henry even appointed him the highest political post possible – Lord Chancellor – which is the king’s chief adviser.

Things proceeded well for about a decade, but Henry was young, egocentric, and distraught by the fact that his wife Catherine had not delivered him a son and heir. Catherine was older than Henry and nearing forty, Henry didn’t think he’d get a son out of her, and I imagine his bitterness grew. Simultaneously, he met and fell in love with another woman, Anne Boleyn, and he decided to rid himself of his wife. But how? He couldn’t have her killed. He couldn’t just sent the queen away. He’d have to divorce her, but divorcing someone meant you couldn’t marry another. That wouldn’t work. There was only one thing to do. He’d have the marriage annulled. There was only one HUGE problem. The Pope refused to annul his marriage to Catherine on the grounds that one can’t throw away a wife because one desires a different wife.

Well, Thomas Wolsey is so important in the church, let’s let him handle it. Surely he can convince the Pope to grant an annulment, especially for the freakin’ KING. OF. ENGLAND.

The divorce went on for years, and each passing message that Wolsey was getting nowhere with the Pope, enraged Henry even more. All for the love of Anne, Henry decided to split from the Catholic Church and become his own religious leader in his own newly formed Church of England. He would grant his own divorce and get rid of his wife. He also decided to get rid of the useless Wolsey. Anne had convinced Henry that Wolsey was slowing down the proceedings on purpose. In 1529, Wolsey’s fall from grace was sudden and total. He was run out of town and stripped of all his titles except Archbishop of York.

Within the year, Catherine was banished from the court. Wolsey was charged with treason and faced beheading. Fortunately for him, he died of natural causes en route to London to answer to the charges. Henry confiscated Wolsey’s Whitehall Palace and married Anne there in 1533.

If all that isn’t sick and twisted enough, Henry had Anne beheaded three years later.