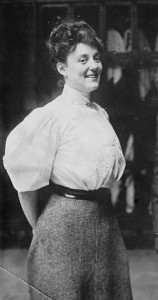 Annette Kellerman (6 Jul 1887 – 6 Nov 1975) was a professional swimmer, a vaudeville star, a writer, an actress, and a multiple-business owner. She had her own line of one-piece bathing suits for women and helped popularize the sport of synchronized swimming. She performed in many aquatic-themed movies, most depicting her as a mermaid. Her mermaid costume designs are still mimicked today in mermaid shows around the world. Ms. Kellerman performed all her own stunts including a ninety-two-foot dive into the sea and a sixty-foot dive into a pool of crocodiles. She was a life-long vegetarian and in her later years, she owned a health-food store in Long Beach, California.

She advocated for the right of women to wear one-piece swimwear, and in 1907, on Revere Beach, Massachusetts, she was arrested for public indecency for wearing this skimpy little number. 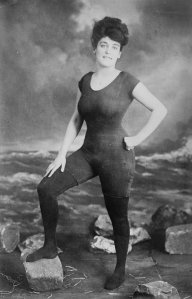 Apparently, Ms. Kellerman didn’t learn her lesson, and the powers-that-be missed her next photo. It’s a publicity picture for the 1916 Fox Pictures film “A Daughter of the Gods.” 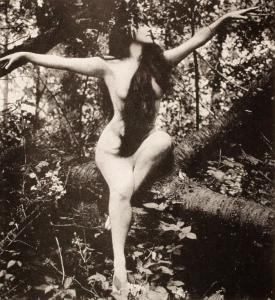 Ms. Kellerman was the first major actress to appear fully nude, and the film was the first million-dollar film in history. No copies are known today. The only remaining full film of hers in existence today is the 1924 “Venus of the South Seas” that was restored by the Library of Congress in 2004. In 1908, a professor at Harvard University named her the “Perfect Woman” due to her resemblance to the Venus de Milo. She was portrayed by Esther Williams in “Million Dollar Mermaid” in 1952, and she has a star on the Hollywood Walk of Fame. She also has a swimming complex in Marrickville, Australia named after her.

She died in 1975 in her home country of Australia and her cremated remains were scattered over the Great Barrier Reef.