My 4th great grandfather was Samuel Dawson Grimes. The line from me to him is my father Andy Crane, my grandfather Frank Crane, my great Amos Crane, my 2nd great Jack Crane, and my 3rd greats Jeremiah Crane and Sarah Frances Grimes.

I haven’t researched my Crane side very much, and certainly haven’t ventured into the wives on that side of the family, but today I found something pretty interesting.

Grandpa Grimes was born around 1757 in North Carolina. There are a few records indicating he participated in the American Revolution, but I haven’t been able to verify that (yet). He married Darcass Wall in 1788 and the two had seven children. At some point, the family moved to Brundidge, Pike County, Alabama, where he died in 1857.

Since I don’t know his exact birth date, I find the following interesting. It’s from Find A Grave.

A newspaper article from the Troy Independent American, published on 22 April 1857, as transcribed by Susie K. Senn in her book “Newspaper Abstracts from Pike County, Alabama 1855-1861”:

The Oldest Man in Pike – Samuel D. Grimes, aged 110 years, and the oldest citizen of this county, died a few days since at his residence. Mr. Grimes enjoyed almost uninterrupted health up to a year or so before his death. For a great part of his life he was a member of the Baptist Church, and died as he lived, an honest, upright citizen and Christian.

I also found his probate records – all thirty hard-to-read handwritten pages. He seemed to be in debt to various local gentlemen, including the local merchant for the purchase of a pair of shoes, a handkerchief, five yards of cotton, and eight yards of calico for $3.45, which was used to “spruce up” his negro woman. His indebtedness was just over $1100.00, and his belongings were auctioned off for $98.00, most being bought by his grown children including his rifle for $1.30. There must have also been a sizable amount of land, as the debtors were paid and there was still plenty to leave to his children and his twenty grandchildren.

The 1840 census shows two adults in his household who couldn’t read or write. It also shows one slave, whom I assume is the “negro woman” mentioned above.

The 1850 census mentions that he is currently 93 years old, living with his daughter, so I think when he died in 1857 he was only 100, but the reporter from the Troy Independent American wasn’t very good at “cipherin’.” 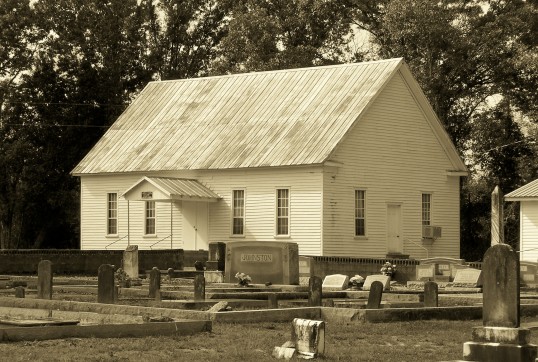 Grandpa Grimes is laid to rest in Union Spring Primitive Baptist Church Cemetery in Brundidge, Pike County, Alabama, where the 2010 census says the population is just over 2000 people, 33% living below the poverty line. I can imagine how small and poor it was in the 1800s when Grandpa Grimes lived there.