A to Z Blog Challenge

H is for Hollingbourne Manor

My mother was a Culpepper. I’ve done tons of research on them. I’ve even written four books about my 10th great grandpa, John Culpepper.

John’s uncle owned a house called Hollingbourne Manor in Kent, England – about five miles outside the town of Maidstone – about two miles from another family home, Leeds Castle. The house, and I use that term loosely, was acquired in 1590 by Francis Culpepper of Greenway court. It was bequeathed to his son Thomas the Elder, and later to his son, Thomas Jr. who was a knight. The last owner was Thomas Jr.’s son William. It was in the family for about 125 years. 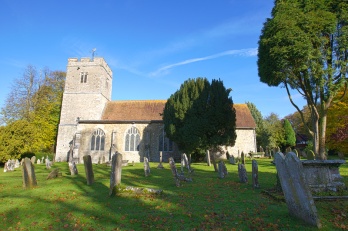 Thomas the Elder built a chapel in the local Hollingbourne church, All Saints Church, as a monument to his wife Elizabeth. In the marble effigy, Lady Elizabeth’s hands each wear a ring tied by a single cord that disappears up the sleeve of her dress. The epitaph written by her husband reads: Optima Faemina, Optima Coniux, Optima Mater, which means: The best of women, the best of wives, the best of mothers.

There are many lead coffins beneath the chapel containing the remains of various Culpeppers. The entrance has now been sealed. The window in the chapel at the foot of Lady Elizabeth’s coffin bears the Culpepper coat of arms. It is the white square in the upper left with the red diagonal line.

Some day I shall visit.

If you love this old England stuff, check out the Culpepper Saga on Amazon.