Everyone told me Italy was beautiful…well, except for Naples. They said Naples was dirty and there were lots of homeless people and pickpockets. They said enjoy every other city, but don’t expect too much from Naples. Upon my arrival at the Port of Napoli, I thought it beautiful, but perhaps close up, they were right. Let’s go see. 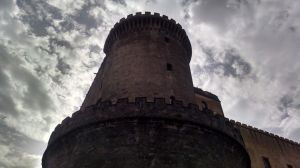 I crossed the street from the port into the city, which is an adventure in itself with tiny cars and motor scooters whizzing by you. Don’t stop walking or you’ll get run over. Just walk. Keep walking. Don’t hesitate. The first site we saw upon surviving crossing the street was an old castle. It was cool.

We entered a mall. Yes, this picture is the inside of the local mall. It’s what you get when you mix ancient architecture with capitalism. Upon exiting the mall, we took the funicular up to the top of a hill. We followed some signs through cobblestone streets toward a castle. We met a nice man named Giuseppe who was walking back to work following his lunch. He is a fourth generation cameo maker, so we stopped by his shop and met his brother and admired the work they do. We then walked up to the next block and came upon this sight of the city with Mt. Vesuvius in the background. Wow.

You’ve got to be kidding me. It was magnificent. How could anyone ever scoff at the beauty that is Napoli? Down in the city, every building is ornate and there are statues everywhere. It was like walking around the set of a Roman movie. Up in the hills, the people were awesome and the views were stunning. 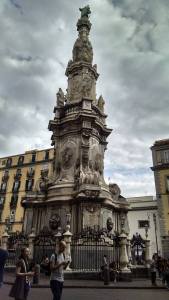 There’s nothing better to break up a long day of sightseeing than FOOD! That was the best part. Apparently, this is the city where pizza was invented. I could live here. Calamari, bruschetta, prosciutto, oh, Napoli has stolen my heart. 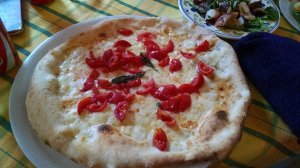 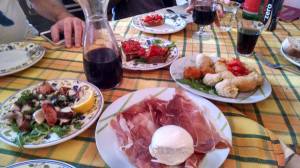