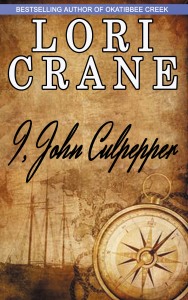 My new book, I, John Culpepper, has been released!!

It is the story of young John Culpepper, whose only dream is to own a merchant ship. As you will see in the snippet below, his aristocratic father is not the most supportive. Some of the story occurs simultaneously with historical events we know well. The follow snippet happens on September 6, 1620.

Fourteen-year-old John stood on the banks of the Thames and stared at her. She was the most majestic creature he had ever seen. He admired her pear shape, her curved lines. From the beak of her prow to the tip of her stern, she must have been nearly one hundred feet in length. Three masts towered above her decks and her white sails billowed, straining against their ropes. Fluttering atop her mainmast, the red-and-white English flag proudly announced her pedigree. She rode the gentle waves toward the English Channel, sailing into the rising sun. Her sharp silhouette stood in contrast to the backdrop of a clouded pink-and-purple sky.

“What are you looking at, boy?” his father bellowed from the carriage.

He pointed at the river as he turned. “Look at the ship, Father!”

“Stop gawking and get over here and unhitch these horses.”

“Yes, sir,” John mumbled. He trudged back toward the carriage, wondering why there wasn’t a footman or stable boy to take care of the animals. He walked around to the other side of the horses and wrapped his fingers around one of the halters.

He peeked around the horse’s nose, watching his father march through the puddles as he crossed the road toward the inn. His father’s long black cloak billowed behind him, caught by an unexpected breeze. John looked up at the sky. Last night’s storm clouds were dissolving and large pockets of blue sky were beginning to show through. When he looked back at his father, the man’s shadow was walking beside him, just as formidable as the real man.

Thomas appeared by John’s side and plopped their father’s large trunk on the ground at John’s feet. The horse jumped and John quickly released the halter.

Thomas complained under his breath, “You’ll never learn, will you? That’s not one of our ships sailing for the Virginia Company. That’s a competitor’s ship. Father isn’t interested in that ship. As a matter of fact, Father has lost so much money investing in these expeditions, he’s not interested in any ships or your fascination with them.”

“What?” Thomas asked from the back of the carriage, where he was now retrieving another trunk.

“How much money has he lost?”

“I don’t know exactly, but he’s been waiting for shipments of timber from Virginia that never arrived. He said the men who sailed there were too busy trying to survive to cut any trees. So, each time a ship returns empty, Father loses money.”

“But money aside, how can he not love them? All of them. They’re beautiful. Imagine where that ship is heading, sailing off to some enchanted seaport. Silk from the Orient, cotton and tobacco from the colonies. I can picture it coming ashore in Virginia, where one can view rolling land as far as the eye can see, so much land and it’s nearly free for the taking.” John turned to gaze again at the ship as it rounded the bend of the river. He took a step away from the horses so he could see her better, if only for the next few moments until she disappeared.

“Don’t admire that ship too fondly. She’s not going to the Orient. She’s called the Mayflower and she’s going to Plymouth.” Thomas looked at the ship. “And she’s not so grand. As a matter of fact, she’s rather old. She’s already crossed the ocean quite a few times.” He looked back at John. “And why are you talking about rolling land? You’ll never own land.” He laughed as John struggled with the horse’s buckles. “Father will leave everything to me. You will be sent to Middle Temple to be trained as a lawyer, and someday you will oversee my estates.”

John gave up on the buckles and marched toward his brother. “I don’t want to oversee your estates. Oversee them yourself.”

I, John Culpepper is available at Amazon.

Stop by the Culpepper Saga Facebook page to see more of the people and places of the series.