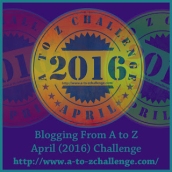 S is for Statue of Liberty 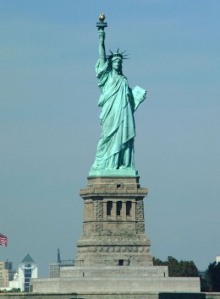 Most people around the world know the Statue of Liberty as a symbol of American freedom. Most Americans know it was a gift from France, but it wasn’t…more on this later.

The statue was completed in France in 1884 and arrived in NY Harbor in 1885 in 350 pieces packed in 214 crates. It took four months to reassemble her, and on October 28, 1886, President Grover Cleveland performed her dedication in front of thousands.

Here’s the stuff you may not know…

…her dedication was protested by women who as of 1886 did not yet have the right to vote. In their eyes, raising a statue of a woman as the symbol of freedom was absurd. 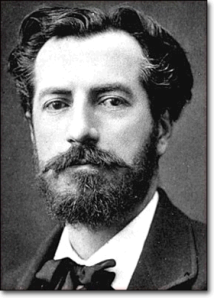 …she wasn’t originally supposed to come to America. The designer Frederic Bartholdi (photo), originally proposed that she stand at the entrance of the Suez Canal as a lighthouse, but the deal fell through, leaving Bartholdi to find another home for her.

…she was supposed to honor American freedom and commemorate the 100th anniversary of the American Revolution of 1776. She finally arrive in 1886, a decade late.

…she was supposed to be a lighthouse, thereby eliciting government funding, but the powers-that-be decided to place her too far inland to do any good as a beacon. She was also supposed to be gilded with gold, but after how much money it took to erect her, the people with the deep pockets decided against it.

…okay, back to the France part. She was built in France, and Bartholdi did everything he could do to get government funding, but they refused. Finally, through fundraisers and donations, the people of France put up $250,000. That’s about $2.5 million in today’s money. Bartholdi spent a decade raising money to finish her, but Joseph Pulitzer, the American newspaper magnate, is the one who finally raised enough money from his American newspaper readers to have her shipped and erected.