That title is a total fabrication. In reality, I come from strong, sturdy stock. My ancestors hail from England, Ireland, Scotland, and places of incredibly hardy men and women in Virginia, North Carolina, South Carolina, Alabama and Mississippi. I’ve studied my ancestors for about 25 years and have built up quite a collection of information, pictures, certificates and documents. I need a place to put all this stuff. How about here?

Let’s start with mom and dad…

Father: Andrew Frank “Andy” Crane II 1940-1994. Andy was born in Mississippi and died of complication of a pituitary tumor removal in Tennessee at the age of 54. He married my mom in 1960 at age 19. They divorced when I was small, and he married another woman and had 2 sons. I have no full-blooded brothers or sisters, but I do have 2 half-brothers from his second marriage, along with 2 sister-in-laws, 3 nieces and 2 nephews. 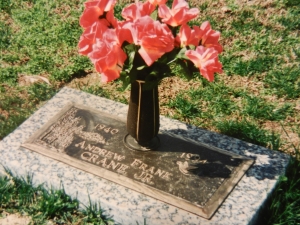 Mother: Linda Faye Culpepper 1944-2001. My mother was also born in Mississippi and was 15 when she and my dad were married. She gave birth to  me at age 18. After their divorce, she moved to Michigan with her second husband, dragging me to the snow and ice. She made her living as a nurse. She died in Michigan following a fall from her balcony at the age of 56.

Frank and Azalea were both born in Mississippi. He died in Mississippi at age 76, and she died at age 87 in Florida while living with her daughter. Grandpa Frank was the strong, silent type. He was quite a bit older than his wife, and as I remember, was already retired when I was small. “Miss Crane” (she would not allow us to call her “grandmother”) was a nurse. I don’t remember much of them due to my move to Michigan. I only saw them on summer vacations, but spent most of my time there with my cousins (who lived next door) and Miss Crane’s mother (who lived next door to my cousins).  Grandpa Frank was married previously and had two boys and two girls in the 1920s and 1930s. He and Miss Crane had one boy and one girl in the 1940s. The girl, my aunt, had three daughters (yes, the cousins who lived next door). Sometime in the early 2000s, my aunt and Miss Crane moved to Florida. Frank is buried in the family cemetery in Mississippi, and Miss Crane has a headstone there also; however, her ashes remain with her daughter in Florida.

Apparently, Ms Crane was not the most “domestic” woman in the world. I heard a story that my mother went to the house and found Ms Crane “mopping” the kitchen floor by using the hose from outside to “wash” it and mopping it out the back door.  😀

“Papaw” and “Mamaw” were both born and died in Mississippi. They married in 1937 and had 2 daughters who were 7 years apart in age. I seem to remember my mother saying there was either a boy stillborn between them or that she was the twin of a stillborn boy. I can’t find any documentation of this, and there is no one left to ask.

My aunt married and had three boys. While my aunt was delivering her third boy, my mother babysat the older two boys. They were 2 and 3 yrs at the time. After spending a week with two toddlers, my mother said, and I quote, “I will never, ever have children.” Nine months to the day after the third boy was born, I was born. Never say never.

Mamaw was a seamstress at the local shirt factory, and Papaw work in the shipping department. She was a fabulous cook, which is what killed her. She died of complications following open heart surgery at age 59. Papaw married a lady from the factory after Mamaw’s death, and we kind of lost track of him after that. He was pretty involved with his new family (the lady had 2 teenage daughters still at home).  He loved to fish and hunt and play his guitar and drink. He died following a stroke at age 80. Mamaw and Papaw are buried next to each other in Newton County, Mississippi.

Story: Not only did Papaw like to fish and hunt, there is also a story that he liked to walk down to the swamp in the dark and catch big frogs. I guess one day when he returned, Mamaw was not happy with him for some reason, perhaps just wondering where he had been. So, to show her what he had been doing, he dumped the bucket of live frogs on the kitchen floor. I can just imagine big frogs jumping around the kitchen.

Me and my 3 boy cousins with Mamaw and Papaw

Coming Soon: Ancestry – or- Why I Am So Jacked Up – Great Grandparents

Featuring – The Great Grandparents!! Don’t miss the stories of  the Irishman, the Choctaw Indian, the moonshiner who went to prison for murder, a picture of baby grandpa, and the sad, sad story of the young woman who died three months after her 10 month old son died. Was it suicide, medical negligence, or as the death certificate says, acute melancholia?