My mother was a Culpepper.

They appear on this page in that order.

Sam was born in Alabama in 1874 and moved to Mississippi in his late adolescence. In early 1899, he was living at Tucker Springs.

From Culpepper Footprints on the Sands of Time by Jean Culpepper Smith:

Annie says, “Sam was really a handsome man with rosy cheeks, dark curly hair, and teeth as white as pearls.”

Jewel Culpepper Lowrey says, ” Yes, I remember good times at uncle Sam’s. I remember once when we were visiting and uncle Sam and Papa (Floyd) robbed a big bee tree. They brought a huge pan of honey back to the house.”  Charles Culpepper says, “Yes, I remember that pan of honey. I ate my fill and I don’t think I have ever been sicker.”

Sam was a sawyer and followed the sawmill business, sometimes being gone for weeks at a time. The family lived on a farm and the children were taught how to run it. He was said to be a strict but loving father. He enjoyed making music and he had a harmonica and a pump organ.  In his old age, the grandchildren would work the pedals for him while he played the organ.

Sam died in 1939 at the age of 65. His death certificate states he died of cerebral hemorrhage caused by hypertension.

Below: Sam and Annie

Note the webbed feet: Sam and Annie’s son Earl Culpepper married Ina Burke (my grandparents). Ina’s mother was Mary Howington, married to JP Burke. I didn’t know a lot about the brothers and sisters of my grandparents when I first started on this journey, so imagine my confusion when I found in Annie’s obituary that her daughter Zeffie Culpepper (my grandfather’s little sister) was listed as Zeffie Howington.  Whoa! Wait! What? Howington?? Grandpa and Grandma just collided.

Let’s go back for one second and make a flow-chart. Sister’s Mary and Julia Howington married brothers JP and David Edmund Burke. Mary and JP had a daughter, Ina (my grandma), who married Earl Culpepper (my grandpa). Earl’s little sister, Zeffie, married Mary and Julia’s little brother, Melton. Imagine me trying to explain to my aunt that her Uncle Melton was also her momma’s Uncle Melton.  Scoring update: Burke 2. Culpepper 1. Howington 1. However, Julia and David Edmund had two daughters who married two Scarbrough brothers, so the scoring update should read: Burke 2. Scarbrough 2. Tied.

(There is also a story that the Scarbrough brothers spent time in jail for stealing fur coats for their girlfriends. That makes me giggle.)

Grandma Annie was born in 1877 in Louisiana.  She appeared at the age of 3 in the U.S. Census in Lauderdale Co, MS and lived there until her husband died in 1939. At some point following his death, she moved to Mobile, Alabama with her son Freddie Lee and his wife Katie. She died in Alabama in 1961 and is buried in Lauderdale Co, MS. That was about a year before I was born, so I never knew her. 😦

(There is also a story of Clinton, the man in the middle in the above photo. In 1922, he married a woman named Eloise and had 2 daughters. Eloise was diagnosed with breast cancer, and Clinton thought he could not live without her, so he put a gun to his head and pulled the trigger. Amazingly, he survived the gun shot wound and his wife survived the cancer, but the marriage didn’t survive the stress, and about 10 years later he re-married. He married a woman named Thelma, who was later also diagnosed with breast cancer. He again put a gun to his head and pulled the trigger. He again survived the gunshot wound, but now had the mentality of a child. He could take care of himself and cook a little, but his speech was severely impaired. Thelma also beat her battle with cancer and took care of Clinton for the rest of her life. She died in 1984. He died shortly after in 1985.)

Annie was the daughter of William Henry Blanks III and Martha Lettie Carpenter. She was the third born of six girls.  In 1916, her little sister Ora gave birth to her 4th child, William Lenard Bates. 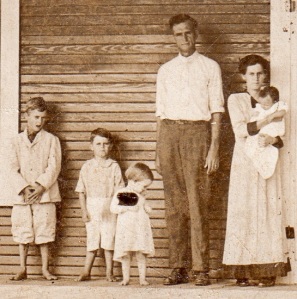 Little William Lenard died shortly after this photo was taken, on 29 May 1917. The family moved to Alabama following his death, but Ora did not recover from the tragedy. She died on 2 Sep 1917 – just over 3 months later. The official cause of death on her death certificate was “Acute Melancholia”. There were also some medical records stating she was having convulsions. I’m not sure what medicine one would take in 1917 to feel better after the death of a child, but whatever it was, it may have killed her.

I had some thoughts that perhaps she overdosed or committed suicide. When I first heard the story, I was very angry for days over the whole situation. I especially felt bad for the small girl in the picture, Mary Louise, who was now 3 years old and without a mother.

As I searched for more answers, I came across a person who seemed to have a lot of information about the family. It turns out this person was Mary Louise’s granddaughter! Mary Louise stayed in Alabama and was raised by her father’s sister in a happy, stable home. She married and had children and live to be 78 years old. 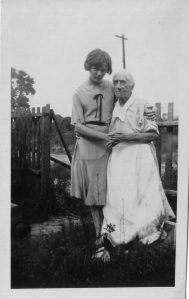 The family story was that Pat was a red-headed Irishman, but my Aunt swears she never saw him with anything but white hair. Pat was born in Mississippi in 1880 of an Irish immigrant, John Francis Burke, and Nancy Didama Spencer. (There is a question about Nancy’s middle name. All census records show Nancy D, and her grandmother’s middle name was Didama. There are also elderly family members who swear she was called Didama, Aunt Damie, and Grandma Damie, but her headstone reads Nancy Jamie.)

Pat married Mary Howington around 1914 and had 7 children. He lived in Newton Co, MS until his death in 1958. Their grandchildren in Mississippi still have his fiddle and her pump organ. He played the fiddle for square dances in the Lauderdale Co, MS area every Saturday night.

Below: Pat and Mary Howington Burke 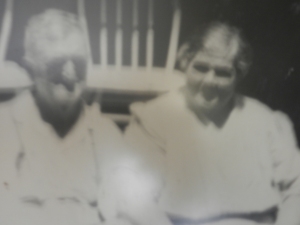 The story I always heard from my mother was that Mary Howington was a Choctaw Indian. Choctaw’s were from that Alabama/Mississippi area. Howington sounds Indian, doesn’t it?? Mary was born in 1893 in Mississippi to John Thomas Howington and Florence J Smith. I read someone’s blog who was trying to tie her Howington ancestor to the Choctaw Indians also. The problem we are having is that after the signing of the Treaty of Dancing Rabbit Creek in 1830, the Indians either moved to Oklahoma or changed their names and assimilated into the white, European culture, making them the first non-European U.S. citizens. The blog ended with the writer stating that her cousin said their Indian heritage did not come from their Howington ancestor, but from his wife, who was a Smith.

LIGHTBULB!! Of course the Indians with names like Lou-a-chubbee, I-ath-le-fiah, and Anah-chi-hat-tah would take generic names like Smith to assimilate into the white culture. Duh! I’m such a dork for thinking Howington was the Indian. Anyway, I’m still struggling with proof of Choctaw heritage. Maybe someday I’ll get it figured out.

Stay tuned for Why I’m So Jacked Up part IIb – the great grandparents on dad’s side…moonshine, murder, and more webbed feet.