Tomorrow I’m having lunch at the Sawyer House. 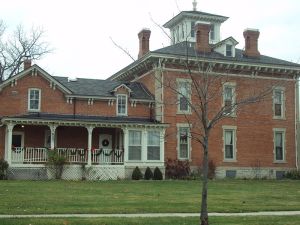 The property is located in Monroe, Michigan. There have been two homes built on the property. The original house was built by Francois Navarre on land given to him by the Potawatomi Tribe. The house is named after one of its residents, Dr. Alfred Sawyer, who lived there from 1859-1870. The original house was demolished and a new one built in 1873. Dr. Sawyer never lived in the current house, but it remained in his family until his daughter donated it to the city of Monroe in 1973.

Following lunch, my ladies from the United States Daughters of 1812 are having a bench dedication at the River Raisin National Battlefield, commemorating the bicentennial of the War of 1812.

While I was writing this little blurb, my phone rang and a lady told me my book “Okatibbee Creek” won the bronze medal in Literary Fiction at the 2012 eLit Book Awards. Check the book out on Amazon. The book is about Hays Rodgers’s daughter. “Wow, that’s a weird coincidence,” said the award-winning author. 🙂