On This Day, April 12, 1861, Fort Sumter, South Carolina was shelled by the Confederacy. This marked the start of the Civil War. 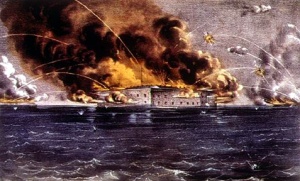 Previously, on February 4th, a convention of seceded states met in Montgomery, Alabama and formed the Confederate States of America.

By April, the fort was running low on rations. President Lincoln (only president for a month at this point) told them he would re-supply and instructed them to hold the fort.

On April 11th, General Beauregard demanded Union Major Robert Anderson evacuate the fort, but he refused. He was warned if he did not evacuate, the fort would be fired upon at 4:30 a.m. on April 12th.

When the evacuation did not happen, as promised, General Beauregard commanded the men to open fire on Fort Sumter. Fortunately, there were no casualties on either side, but the fort had no option but to surrender. 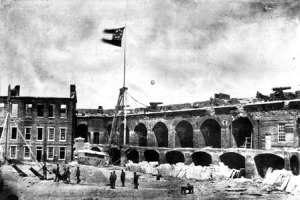 The Confederate flag was raise over Fort Sumter and a 100-gun salute to the flag was planned, but a gun discharged prematurely, killing Union Private Daniel Hough. He was the first casualty of the war.

The war produced over one million casualties with between 650,000 and 850,000 Americans giving their lives. They died fighting their own countrymen and left behind as many grieving parents, widows, and children. These Americans gave their lives to save the United States they knew, whether it be Union or Confederate. As Americans, we have a duty to honor their memories and to get it right. God forbid, we ever divide and do it again.

(shameless plug: I wrote this post in honor of my new book On This Day. It’s a perpetual calendar/journal/record book. If you’re a genealogy buff, you HAVE to get this book to keep track of your ancestor’s special dates. Check it out here.)