On This Day in 1877, a beautiful woman was born. On November 10, 1877, my great grandmother, Josephine Annie Blanks Culpepper, was born in Kemper County, Mississippi to William Henry Blanks III and Martha Lettie “Mattie” Carpenter. She was in the middle of seven children, six of them being girls. Her father was a teenager when the Civil War took place and fought as a private in the 2nd Mississippi Infantry Company H. Her mother was a young lady of fourteen when she lost her own father at the Battle of Stones River on December 31, 1862. I can imagine as parents, they did their best to keep the peace in the household, but there is a distinct possibility they both had emotional scars from the trauma each had seen and faced during the war.

Annie grew up on a farm in Daleville, Mississippi, and with eleven aunts and uncles in the area, one must assume she had plenty of cousins to play with. She witnessed amazing technological changes as home comforts such as indoor plumbing and electricity moved from the nearby city of Meridian to the country, and paved roads reached homes throughout the area at the turn of the century before the Model T made its first appearance in 1908.

In 1899, she met handsome William Samuel “Sam” Culpepper, and they married when she was 21. She said about him, “Sam was really a handsome man with rosy cheeks, dark curly hair, and teeth as white as pearls.” Sam was described as a kind fellow who always had a twinkle in his eye and a smile on his face. He loved fishing, squirrel hunting, and playing the family’s old pump organ. He was a sawyer by trade and followed the sawmill business, often being gone for weeks at a time. Fortunately Annie and Sam had five boys and four girls between 1900 and 1921, and the boys were taught to run the farm in their father’s absence. He was said to have been a strict but loving father.

After their youngest child married and moved out in 1938, one would have expected they lived out their retirement in comfort, but sadly, Sam suffered from high blood pressure, and his life was cut short by a stroke at the age of 66, on December 10, 1939. Annie never remarried. In her later years, she moved to Mobile, Alabama and lived with their sons who had relocated there.

She passed away at the age of 84 on November 15, 1961. She is laid to rest next to her husband at Mt. Nebo Cemetery in Kemper County, Mississippi. 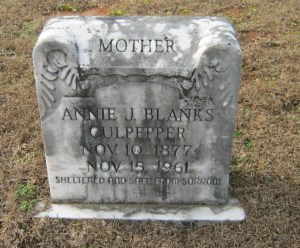 Her obituary is as follows:

Funeral arrangements were being completed today for Mrs. Anne Blanks Culpepper, 84 of Mobile, a former resident of the Martin community who died yesterday at Mobile.

Mrs. Culpepper was a member of the Duffee Baptist Church and had been active in its various organizations until she suffered a broken hip three years ago. Her two daughters are Mrs. Mae Howington of Meridian and Mrs. Aaron Spears of Enterprise. She is also survived by five sons, Joe Culpepper of Susqualena; Earl and Clinton Culpepper, Meridian; Fred and Frank Culpepper, Mobile; and two sisters, Mrs. Woodie Logan and Miss Velma Blanks of Laurel.

The body was to arrive in Meridian this afternoon and will be at Stephen’s. The service will be held at 2 o’clock tomorrow at the Mt. Nebo Baptist Church with Rev. Herman Pilgrim in charge, assisted by the Rev. Vernon Blackburn. Interment will be in the Mt. Nebo Cemetery.

This post is brought to you by On This Day available at Amazon.