Yesterday, November 29, 1864, Carrie McGavock sat on the front porch of her Tennessee home, the Carnton Plantation, enjoying a warm afternoon of Indian summer. Suddenly, she witnessed thousands of Confederate troops marching across her 1400 acres, heading directly toward her home. The troops told her a battle was coming and asked if they could use her house as a hospital, and by nightfall, surgeons and medics had arrived and started moving her furniture against the walls to make way for the injured. They took the doors off her outbuildings to be used as cots and operating tables. I can only imagine how nervous she felt, dreading the unknown that was to come. 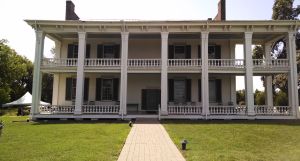 At 3:30 p.m. the five-hour battle began. Cannon fire shook the house. Bullets drilled holes into the walls of the outbuildings. By the time night fell and the battle was over, hundreds of wounded, bleeding, and dying men had been carried into her home and placed throughout the rooms, in the hallways, on the staircase. Four dead generals lay covered on this back porch. 150 soldiers died in her home that night. The wooden floors are still stained with their blood. The outbuildings still show the bullet holes.

At the first light of dawn, the 750 residents of Franklin, TN began tending the nearly 10,000 Union and Confederate soldiers lying all over McGavock’s property, some dead, some wounded, moaning and crying out for help. Forty-four private homes in Franklin were converted into temporary hospitals.

By 1866, the McGavock’s had seen numerous bodies that had been buried in shallow graves all over the battlefield become unearthed by the elements and the woodland animals. The McGavocks donated two acres of their land to be used as a Confederate Cemetery and properly re-interred the soldiers. Carrie’s husband, John McGavock, and the townspeople cataloged and buried 1500 Confederate soldiers, 500 of whom they could not identify. The Union soldiers were moved to the National Cemetery in Murfreesboro, TN.

Carrie McGavock cared for the Confederate cemetery until her death in 1905, at which time it was turned over to the United Daughters of the Confederacy.