Burying children used to be a more common occurrence than it is today.

On This Day in 1921, Fleta Marie “Clarice” Pickett was born in Lauderdale County, Mississippi to Benjamin Berry Pickett and Eula Ouida Keene Pickett (my great grandparents). She had two older siblings: Howard who was four and Margaret Azalea (my grandmother) who was two. She was named after her mother’s older sister, Fleta. Months before, Fleta had given birth to a daughter and named her Eula. The two sisters, though fourteen years apart, were obviously very close.

Clarice was born into a large family as her father had five siblings and her mother had seven who all lived nearby. Her father’s mother was from the Fisher family, and the Picketts, Keenes, and Fishers were numerous in the area, and still are today. So much so, that they have their own family cemetery on Zero Road called Fisher Cemetery. Even though family cemeteries fell out of vogue in the early 1900s in favor of community cemeteries, Fisher Cemetery is still used today.

At one year and five months, Clarice succumbed to pneumonia. Note in her obituary that the family held the funeral in their living room as was custom in those days. Before the mid-1900s, the family of the deceased prepared, dressed, and displayed their loved ones, and following the funeral, the body was carried out of the house head first. Clarice’s obituary reads as follows:

Fleta Marie “Clarice” Pickett, 17-month-old daughter of Ben Berry and Eula Keene Pickett, who reside near Zero, MS, passed away this morning at 4 o’clock. Funeral services will be held from the residence Wednesday morning at 10 o’clock. Interment is to follow in Fisher Cemetery. 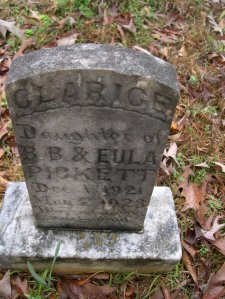 Rest in peace, little one.

You have not been forgotten.