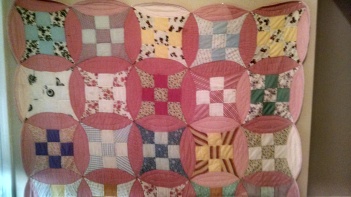 When I was a young girl, my paternal great grandmother made me this quilt. When I was at her house, I noticed her sewing in the evening while watching television. It was done completely by hand. It never occurred to me that she was sewing it for me.

At the age of fifty, I still have the quilt and I treasure it. At some point, she made me a second one, and my maternal grandmother, who was a professional seamstress made me a third. I should probably pass them down to my children, but I can’t bear to part with them.

I have long been an artist. I make music professionally. I write novels professionally. I’ve made all of the artwork in my home, from paintings to rugs to throw pillows. Well, I was bored and decided to take on the time-consuming project of making a quilt. What was I thinking?? 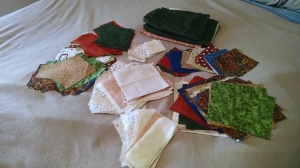 It started with cutting out 680 pieces. Sigh. That took a couple weeks. Then, fortunately, I had house guests, so I put it all in a box and ignored it for a couple weeks.

When I pulled it back out, I began making pinwheels for the center of the blocks. Twenty pinwheels seemed daunting, but using a sewing machine, (not sewing by hand, you silly rabbit!) the pieces came together fairly quickly, but still….there was twenty of them. 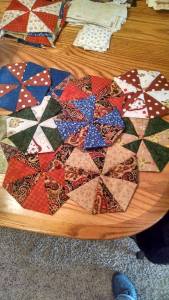 Now, I had to cut these square pinwheels and turn them into octagons. Not owning a special ruler or being able to find one at JoAnn Fabrics, I spent hours figuring out how to do this. After I had a total meltdown, my husband quietly worked on the computer constructing a template for me. In the meantime, I found a video on Youtube showing an easy way to turn a square into an octagon. When I cut one in two seconds and showed him, he was awestruck by the simplicity. “Well, if you want to do it like that,” he said sarcastically.

The original pinwheels were 7” squares, and after I turned them into octagons, I needed to sew corners on them, making them 6.5” squares. At the time, I was thinking this was some kind of cruel joke, but as the pinwheel got new corners, it began to change shape. It looked like a cross. Weird illusion.

Next, I started working on the star points. They were time consuming, but they came together easily. The octagon/square was placed in the middle of the star points. Notice in this photo, the octagon still looks like a cross, and the completed square has two star points pointing up. Well, that’s also an illusion and won’t look like that for long.

I was supposed to cut these completed squares into large circles, but as with cutting octagons, that was just too much work. So instead, I sewed together frames, sewed them onto the completed squares, lining up the seams with each star point and creating a whole new angle on the original square. I flipped it over and trimmed off the excess corners on the square. That was so much quicker than trying to cut a perfect circle, hoping I didn’t cut it too small. From the wrong side of the quilt, it’s pretty sloppy, but from the right side, you can’t tell, and it saved me tons of time and probably a half bottle of whiskey. 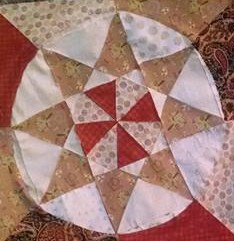 Since the octagon and the star points shifted with adding the frame, you can see in the finished square that the cross is gone and the star only has one point sticking up. This whole quilt is one big illusion.

1910 seams later, the quilt top is finished. I need to sandwich it and start quilting. But I think I need to take a break for a couple weeks first.

Won’t it be fun if my great grandchild won’t part with this quilt?